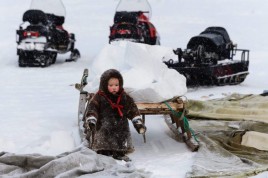 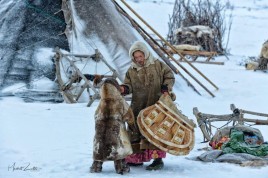 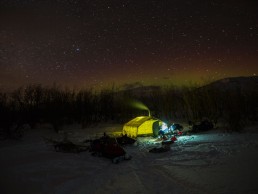 Arrival to Salekhard. Transfer to the city, we stay in the hotel, get acquainted with the city, try local delicacies, buy local warm clothes and shoes (who needs it).

Early rise, at 8 am we are already loaded onto the SUV, on which we cross the ice crossing Ob and we go to the village of Harp, where we load our things onto snowmobiles and are already on their way. On this day we will cross the Polar Urals and reach the village of Seida on the Usa River. Part of the way, already at the dark time of the polar day, we will go along the ice of this river in parallel with the railway. We'll spend the night in a heated trailer of a local resident.

In the morning we cross the railway and go deep into the arctic tundra. There is no civilization here, only traces of the Nenets reindeer herders are found occasionally - the parking lots left by them, and rare sheds in the middle of many kilometers of tundra.

On this day, well tired and frozen, we will reach the source of Pym-Va Shor in the territory of the Nenets Autonomous District, near which we will put a large heated tent where we will spend the night.

Bathe in the source and explore the neighborhood. A day of rest from a long and rather tiresome road.

Again all day on the road through the arctic tundra. This time our goal will be Vorkuta - a great city and a real civilization after two days of wandering through the tundra. We stay in a comfortable hotel.

The city is a pretty depressing spectacle - the pompous buildings of the Stalin empire are side by side with faceless paneled Khrushchevs, and neat facades - with dilapidated courtyards, while two-thirds of houses, including five and even nine floors, are abandoned. In the Soviet years the population of Vorkuta was 200 thousand people, today - 60 thousand. And this means that two-thirds of the inhabitants of this once-powerful industrial center left, leaving their apartments and houses, which no one can control and maintain.

We will dedicate this day to exploring the city - although it is depressive, there is something to see in it :) And also we will rest, we will buy food and fuel for the next, even more difficult journey.

In the morning we head for the Polar Urals, where, after a rather long crossing over the tundra, and then along the foothills, we will set up our camp at the confluence of the Bolshaya and Malaya Kara rivers. The place is wild and very rarely visited by tourists, the more valuable for us is its remoteness and isolation from the outside world - the sky here is fantastically beautiful, and the air and snow are as pure as a child’s tears.

Having overcome several mountain valleys and passes, we come to the Gornokhadatinsky reserve, located in the Priuralsky district of the Yamalo-Nenets Autonomous District in the basin of the Shchuchya River and its right tributary, the Big Hadata, in the foothills of the Polar Urals. Here are found rare species of animals listed in the Red Books of Russia and the Yamal-Nenets Autonomous Okrug. Many of them we can hardly see - meeting with them in the wild is a rarity and good luck, but the musk oxen are huge, shaggy and safe for humans, we will see for sure, and not just see, we arrange with them a real photo session.

Day of rest and walks in the reserve. Upon request, you can organize a horse riding excursion, as well as a steam bath.

Again we go all day, but the landscape is completely different - we are traveling among the mountains and this is not the same as going on the tundra. We intersect the length of Shchuchye Lake, stretched out like a pike's body, and we camp for the night on the bank of Lake Bolshaya Khadat.

Having overcome two mountain passes we come to the settlement of reindeer herders-Nenets, where we will stop for the night in the plague of our hospitable conductor. Traditional Nenets dishes and northern lights in the background of the Nenets plague.

Day of rest in the camp of reindeer herders. We will go to the mountains to see and get to know more closely the reindeer - animals that are fearful and not so easily letting people in. But experienced reindeer herders with the help of dogs will drive a herd to us and we will have the opportunity to treat them with bread and salt, having received in return a lot of attention and almost dog fidelity to these strange animals.

If you want, you can hunt hares and ptarmigans, which will cooked the mistress of the plague in the evening. And in the evening we shoot the polar lights again. Even if it does not, the sky here is always very bright and beautiful.

We leave hospitable reindeer herders and go to the village of Harp through the mountain pass. In Harp we are overloaded into an already familiar SUV and come to Salekhard. We eat off in a cafe or restaurant, in the evening, after many days of cold and wind, get warm in the bath. Well, we spend the night in a comfortable hotel.

In the morning we will have time to visit an interesting museum complex, and after lunch leave to the airport and fly to Moscow, and then to home.

Note: The guide will adapt the program of activities according to the group.

The order and content of the expedition may vary. Adapt the route and content based on conditions and options offered each time. The Nenet can move their camp at any time, so final location of homestay will only be known just before departure.

During the expedition the co-operation of all participants will be crucial. There is no cook on this trip, preparing the meal is a groups task.

14-day trip on snowmobiles to the very depth of the Arctic on the route Salekhard - hot spring (above the Arctic Circle) - Vorkuta - Polar Urals - Gornokhadatinsky reserve (a photo shoot with the musk oxen) - Nomasic campsite - Salekhard.

- Meals as specified in the program;

- Transports as specified in the program;

- Activities according to program;

- Telephone SAT (in case of emergency);

- Any service in Moscow;

- All services not specified in "Included".

Price is based on 2 people traveling
Individual supplement: please inform